Everybody I know who has a dog usually calls him “Rover” or “Spot”. I call mine Sex. Now, Sex has been very embarrassing to me.

When I went to the City Hall to renew the dog’s license, I told the clerk that I would like a license for Sex. He said, “I would like to have one too!” Then I said, “But she is a dog!” He said he didn’t care what she looked like. I said, “You don’t understand… I have had Sex since I was nine years old.” He replied, “You must have been quite a strong boy.”

When I decided to get married, I told the minister that I would like to have Sex at the wedding. He told me to wait until after the wedding was over. I said, “But Sex has played a big part in my life and my whole world revolves around Sex.” He said he didn’t want to hear about my personal life 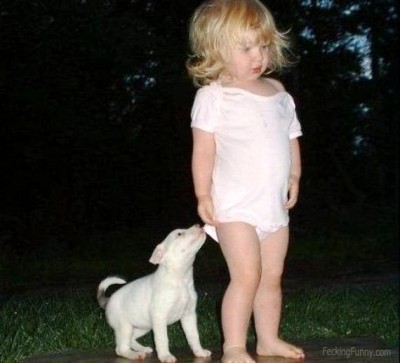 and would not marry us in his church. I told him everyone would enjoy having Sex at the wedding. The next day we were married at the Justice of the Peace. My family is barred from the church from then on.

When my wife and I went on our honeymoon, I took the dog with me. When we checked into the motel, I told the clerk that I wanted a room for me and my wife and a special room for Sex. He said that every room in the motel is a place for sex. I said, “You don’t understand. … Sex keeps me awake at night.” The clerk said, “Me too!”

One day I entered Sex in a contest. But before the competition began, the dog ran away. Another contestant asked me why I was just looking around. I told him that I was going to have Sex in the contest. He said that I should have sold my own tickets. “You don’t understand,” I said, “I hoped to have Sex on TV.” He called me a show off.

When my wife and I separated, we went to court to fight for custody of the dog. I said, “Your Honor, I had Sex before I was married but Sex left me after I was married.” The Judge said, “Me too!”

Last night Sex ran off again. I spent hours looking all over for her. A cop came over and asked me what I was doing in the alley at 4 o’clock in the morning. I said, “I’m looking for Sex.” – My case comes up next Thursday.

Well now I’ve been thrown in jail, been divorced and had more damn troubles with that dog than I ever foresaw. Why just the other day when I went for my first session with the psychiatrist, she asked me, “What seems to be the trouble?” I replied, “Sex has been my best friend all my life but now it has left me for ever. I couldn’t live any longer so lonely.” and the doctor said, “Look mister, you should understand that sex isn’t a man’s best friend so get yourself a dog.”