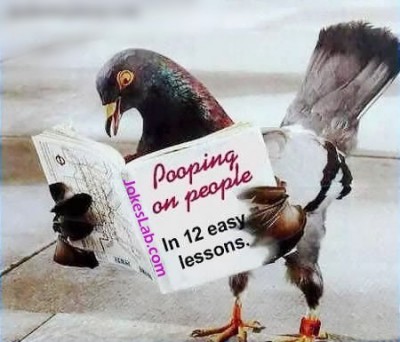 One day a guy walked into a pet store to buy a parrot.

He found one that he liked and went up to the counter to buy it. The store clerk saw which parrot he had picked out and said, ”That parrot repeats everything he hears.”

So the man bought the parrot and left the store.

As he was walking down the street, he saw a cop chasing a robber.

They kept walking and found a man who was trying to pry his car off the ground with a crowbar because his wheels had been stolen.

They kept on walking to a carnival. A guy at a gamestand yelled, ”Hit a big one, win a prize!”

Then they walked into a church and sat down.

The minister was in the middle of the sermon.

The parrot said, ”Shoot him down,shoot him down!”
The minister said, ”The devil is below us.”

Then the minister got angry and threw a bible at the parrot. The parrot ducked and the bible hit a fat lady behind him.