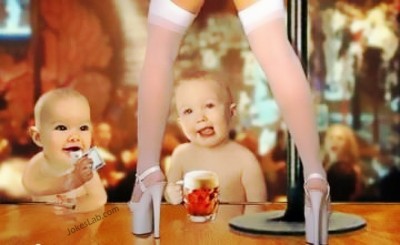 A little girl and her mother were out and about.

Out of the blue, the girl asked her mother, “Mommy, How old are you?”

The mother responded, “Honey, women don’t talk about their age. You’ll learn this as you get older.”

The girl then asked, “Mommy, how much do you weigh?”

Her mother responded again, “That’s another thing women don’t talk about. You’ll learn this, too, as you grow up.”

The girl, still wanting to know about her mother, then fired off another question, “Mommy, why did you and Daddy get a divorce?”

The mother, a little annoyed by the questions, responded, “Honey, that is a subject that hurts me very much, and I don’t want to talk about it now.”

The little girl, frustrated, sulked until she was dropped off at a friend’s house to play. She consulted with her girlfriend about her and her mother’s conversation.

The girlfriend said, “All you have to do is sneak a look at your mother’s driver’s license. It’s just a like a report card from school. It tells you everything.”

Later, the little girl and her mother were out and about again.

The mother was very shocked. She asked, “Sweetheart, how do you know that?”

The little girl shrugged and said, “I just know. And I know how much you weigh. You weigh 130 pounds.”

“Where did you learn that?”

The little girl said, “I just know. And I know why you and Daddy got a divorce. You got an ’F’ in sex.”