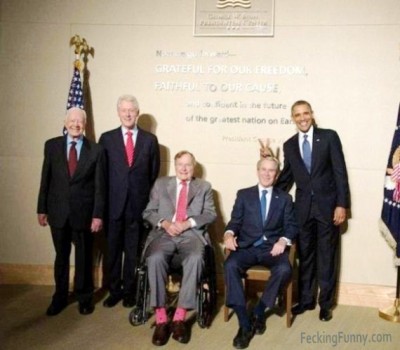 When Einstein died and arrived at the gates of heaven, St. Peter wouldn’t let him in until he proved his identity.

Einstein scribbled out a couple of his equations, and was admitted into paradise.

And when Picasso died, St. Peter asked, “How do I know you’re Picasso?”

Picasso sketched out a couple of his masterpieces. St. Peter was convinced and let him in.

When George W. Bush died, he went to heaven and met the man at the gates. “How can you prove to me you’re George W. Bush?” Saint Peter said.

St. Peter says, “Well, Albert Einstein showed me his equations and Picasso drew his famous pictures. What can you do to prove you’re George W. Bush?”

Bush replies, “Who are Albert Einstein and Picasso?”