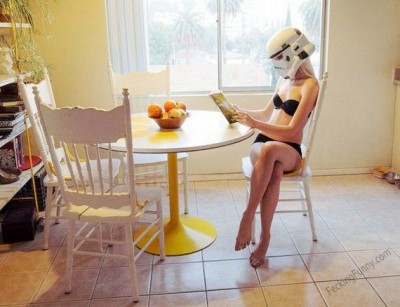 If Oracle made toasters… They’d claim their toaster was compatible with all brands and styles of bread, but when you got it home you’d discover the Bagel Engine was still in development, the Croissant Extension was three years away and that, indeed, the whole appliance was just blowing smoke.

If Hewlett-Packard made toasters… They would market the Reverse Toaster, which takes in toast and gives you regular bread.

If IBM made toasters… They would want one big toaster where people bring bread to be submitted for overnight toasting. IBM would claim a worldwide market for five, maybe six toasters.

If Xerox made toasters… You could toast one-sided or double-sided. Successive slices would get lighter and lighter. The toaster would jam your bread for you.

If Radio Shack made toasters… The staff would sell you a toaster, but not know anything about it. Or you could buy all the parts to build your own toaster.

If Thinking Machines made toasters… You would be able to toast 64,000 pieces of bread at the same time.

If Cray made toasters… They would cost $16 million but would be faster than any other single-slice toaster in the world.

If the Rand Corporation made toasters… It would be a large, perfectly smooth and seamless black cube. Every morning there would be a piece of toast on top of it. Their service department would have an unlisted phone number and the blueprints for the box would be highly classified government documents. The X-Files would have an episode about it.

If the NSA made toasters… Your toaster would have a secret trap door that only the NSA could access in case they needed to get at your toast for reasons of national security.

If Sony made toasters… The ToastMan, which would be barely larger than the single piece of bread it is meant to toast, can be conveniently attached to your belt.

If Timex made toasters… They would be cheap and small quartz-crystal wrist toasters that take a licking and keep on toasting.

If Fisher Price made toasters… ‘Baby’s First Toaster’ would have a hand-crank that you turn to toast the bread that pops up like a jack-in-the-box.

If Microsoft made toasters… Every time you bought a loaf of bread, you would have to buy a toaster. You wouldn’t have to take the toaster, but you’d still have to pay for it anyway. Toaster ’02 would weigh 15,000 pounds (requiring a reinforced steel countertop), draw enough electricity to power a small city, take up 95% of the space in your kitchen, would claim to be the first toaster that lets you control how light or dark you want your toast to be, and would secretly interrogate your other appliances to find out who made them. Everyone would hate Microsoft toasters, but nonetheless would buy them since most of the good bread only works with their toasters.

If Apple made toasters… It would do everything the Microsoft toaster does, but five years earlier.